this case is sure dragging on for what increasingly seems to have been drunken ramblings!

Astonishingly when Delroy Young received a far more plausible death threat far less investigation ever took place and we understand that although the miscreant who threatened Delroy Youing was known to the police no action was taken..

Had this man been a police officer and had actually shot Farage or Young it is probable they would have been sent on holiday with their family and when they returned have been let loose to gratuitously kill again - as with the inadequately trained idiot who executed Jean Charles de Menenez. 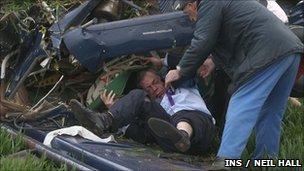 A pilot found guilty of threatening to kill UKIP leader Nigel Farage following a plane crash has been told he faces a suspended jail term.
A jury found Justin Adams guilty of making five threats relating to Mr Farage and crash investigator Martin James after the accident in May 2010.
The court heard the recording of a phone call where Adams claimed to have a 9mm pistol.
Sentencing of Adams, 46, of Oxfordshire, was adjourned.
Judge Mr Justice Saunders agreed to allow a further report on the defendant's problem with alcohol to be compiled.
He said an assessment needed to take place to find out if a treatment programme for alcohol should be a term of a suspended sentence order.
'Take them out'He told Adams: "I have already given the indication that I will pass a suspended sentence of imprisonment. However, things can change if I hear about any more threats."
Adams was remanded in custody until 10 June, when he will sentenced at Oxford Crown Court.
The crash in Northamptonshire on 6 May last year, the day of the general election, left both Adams and Mr Farage in hospital.
During the trial the jury was played a recording of an exchange between Adams and Sharon Bailey, a police inquiry centre officer at Thames Valley Police.
He said: "I'm going to kill somebody or two", the court heard.
Within the conversation, Adams was heard to say: "I know where they live, they destroyed my life."
'Get put inside'He later added: "I now have a 9mm pistol, I've got the means - I will take them out and then myself."
Adams told the operator he had lost his livelihood, house, wife and child in the wake of the air crash investigation.
An Air Accidents Investigation Branch report found the plane crashed when a campaign banner it was towing became entangled, causing the plane's nose to drop.
A subsequent Civil Aviation Authority inquiry, which involved Mr James and investigated whether Adams was qualified to fly with a banner, later cleared the pilot.
Adams told the operator: "You need to understand all charges were dropped against me after six or seven months of investigations. In the intervening period everything else fell apart."
He added: "He's taken my life, I'll take his."
Adams said he had received media offers to talk about the crash, but it had been suggested to him by Mr Farage that he should not speak until after the conclusion of the investigation, the court heard.
He claimed friends later informed him Mr Farage was "generating PR as a result of the crash".
Giving evidence in his defence, Adams told the jury that after the crash his mental health had been "rapidly spiralling downhill", as his business and personal relationship deteriorated.
He said he felt he was not receiving the help he needed and made the threats "in the belief and hope I would get put inside".

To view the original of this story CLICK HERE

Astonishingly it would seem that so far, based on a mental health issue, Justin Adams has spent longer in prison than Nigel Farage's close associate the fraudster and criminal Tom Wise MEP UKIP!
.