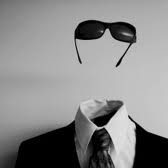 The Invisible Man interviews UKIP Research Director who has failed to notice the car park is empty and it is Sunday morning on a bank holiday weekend.

It NEVER Pays to treat the supporters and electorate as idiots as Derek Clark so consistently does - no management, no skills and a complete collapse in membership from around 6,000 to about 400 in the East Midlands & thus no viable candidates!
.

UKIP by-election candidate Abhijit Pandya has responded after he was criticised for writing a blog post about Islam.
Last week, the Leicester South election candidate wrote an article which called Islam "morally flawed and degenerate" and said he backed a controversial Dutch politician, who called Islam "a retarded ideology".
In an editorial in the Mercury, we criticised his comments.
Now, a video has been uploaded to Mr Pandya's blog showing him turning up at the Mercury's closed offices on Sunday and complaining that no-one was there to talk to him about the issue.
He says in the video:
"They've published this thing, the Leicester Mercury, about my blog, and they're not coming out to actually confront me or speak to me. I think it's absolutely totally appalling.
"The building is empty. We rang these people, they're not picking up the phones.
"They have published something that says 'do not vote UKIP' and that's just absolutely extraordinary for a newspaper to do that.
"Does that mean that a newspaper is completely unbiased and doing the public a favour by neutral reporting? I don't think so.
"There are issues here that we really need to confront and look at, and this newspaper is not giving me a fair say in its coverage and also telling people not to vote for my party."

A message then appears on screen which says: "So what would you say to the Leicester Mercury if they could be bothered to speak to you?"
He then addresses a point off camera.
However, it is unclear whether anyone is actually standing there.
He said in the video he had a problem with the Mercury's article, saying he had made unsubstantiated comments about Muslims in his blog.
He added: "That isn't the case, I've made it quite absolutely clear what the problems are amongst the Muslim community in Britain, particularly those that affect Leicestershire and Leicester South – the constituency I'm standing in.
"I think it's absolutely appalling that 67 per cent of Muslims are unemployed at the moment in Britain, 75 per cent of them women.
"I think this is something we should look at seriously and not have censorship in the way that you have done from your newspaper.
"We don't have a serious debate, we have silly faff-around reporting as your newspaper has done over the last week. We're never going to deal with this problem.
He also said: "It's appalling today that I've come here on Sunday there's no-one here to talk to me about this issue – who's actually written this article.
"Where is your editor and where is David MacLean, who's been saying this silly stuff without editing it."
Councillor Manjula Sood, chair of Leicestershire's Council of Faiths, said: "Mr Pandya's outrageous and out of order comments are not needed, especially in a city as diverse as Leicester.
"Singling out and attacking a single faith is simply unacceptable and all faiths in the city should condemn the comments."

To view the original article CLICK HERE
READ THE BLOG POST.
WATCH THE VIDEO.
Leicester must be well impressed with UKIP with this silly self impressed wee chappie and being further impressed with the direct contempt UKIP has shown in standing as a paper candidate a schoolgirl to manage Leigester's £Billion budget and services as Mayor.