UK Independence Party members could face a case re-hearing over claims they discriminated against a lesbian MEP, it has emerged.
James Sanders
news.PinkPaper.com
Wednesday, 2 March 2011
1 March 2011

UK Independence Party members could face a case re-hearing over claims they discriminated against a lesbian MEP, it has emerged.

Nikki Sinclaire claims she had the whip removed and was not allowed to stand for the Commons following her refusal to work with the party’s European partners, Europe of Freedom and Democracy, which – according to Sinclaire – are rife with people who have “openly homophobic opinions”.
Sinclaire took the party, Nigel Farage and fellow MEP Godfrey Bloom to an employment tribunal saying they discriminated against her because of her sexuality.

According to the Coventry Telegraph, the party said an administrative error on their part meant they filed no defence against the claim.
Shortly after, a judge at an employment tribunal in Exeter made a default ruling in Sinclaire’s favour, and a remedy hearing was expected to take place next week to fix a level of compensation.
But now Sinclaire has agreed to have a mediated meeting with the political party in a bid to settle outside of the tribunal reading.
However, she has warned that she's prepared to continue with the tribunal if necessary.
To view the original of this Press Article CLICK HERE 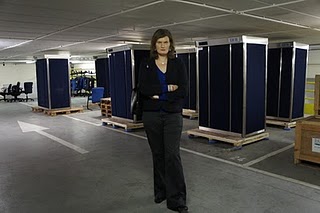 Sinclaire with £100 of £1,000
of EU Waste
Body Scanners Stand Idle
In EU Garage Space for Years!

A DISCRIMINATION case brought against the UK Independence Party by one of its former MEPs from the West Midlands could be reheard.
Lesbian Nikki Sinclaire, an independent MEP for the West Midlands, brought a case of sexual orientation discrimination against the party after she had the whip removed.
Party leader Nigel Farage took action in January last year after she refused to sit with members of the far-right Italian party Lega Nord, claiming some of its members were homophobic.
Ms Sinclaire said it was “ridiculous” she had been asked to join the Europe of Freedom and Democracy bloc, which includes Lega Nord.
She said: “You would not expect a black MEP to sit next to a Ku Klux Klan member so why would you expect me to sit next to someone who wanted me dead?”
Ms Sinclaire took Ukip, Mr Farage and fellow MEP Godfrey Bloom to an employment tribunal saying they discriminated against her because she is gay.
To read this original article CLICK HERE
.