Election results speak volumes and domestically UKIP barely whispers with less than 30 elected officers in National politics out of 19,500 after 20 years!

Conservative Home seem less than impressed with their latest turncoat be that from or too their party!
.

it seems that with UKIP's abject failure at the polls on any domestic matter on an ongoing basis it is singularly unlikely they will ever be more than a domestic nuisance party - mainly as a result of the lack of OQ and leadership qualities of those in its so called leadership team.

UKIP rank and file are in the main a fairly decent crowd of mostly patriots but the overt racism, anti Judaism and violent fear of homosexuals amongst its leadership and particularly their Pan EU Political Party EFD Group which is extreme by ANY civilised or ethical terms.

These allegiances and the unpleasant and dishonest antics and distortions by its spokesmen, on the internet and elsewhere, leaves such a bad taste in the mouth that the peoples of these United Kingdoms repeatedly reject them in domestic elections though willingly use them as a dustbin for their protest votes in EU elections where they are clearly seen as an irrelevancy.

Tjhey have become something of a last resting place for turncoats and charlatans seeking to prolong or enhance their income having fallen out with those who elected them - an infill between pantomime and publication I guess.

The endless squabbling and utter unprofessionalism of the party and the rank corruption and duplicity of its leadership team and its parasites - In reality would YOU wish to be associated with many of the low lifes and self serving creeps in and amongst UKIP's upper echelons? Many are so vile they dare not even publish their lies, distortions and bile in their own names!

You may find the following comments from Conservative Home Blog of interest, though I do not for a moment agree its conclusion as The Tories offer no earthy hope of EUroScepticism coming to be meaningful and not one iota of EUroRealism will ever be given credence - there are just too many corrupt Tory politicians feeding with their snouts in The EU troughs on the gravy train and viewing it as a sinecure when they fail in domestic politics.

Cllr David Potts, a councillor on South Tyneside, has defected from the Conservatives to UKIP.
He says:

“The Conservative Party is no longer the party I once loved. Modern Tories have sold our country down the river, and seem obsessed with being entirely consumed, both socially and economically, by the
European machine.

“I believe David Cameron is a spineless prime minister, and I deeply regret having supported his bid for the party leadership.

“UKIP is the only party talking sense. I know that I can do more as a UKIP politician than I ever could as a Conservative.”

“Nigel Farage MEP, the UKIP leader, has consistently and correctly predicted the economic Armageddon that we face in Europe at the moment. This was not an easy decision to make. I had been a Tory Party member since the age of 14.

The problem is that Cllr Potts thus makes it harder to achieve an overall Conservative majority and thus a more Eurosceptic Government. 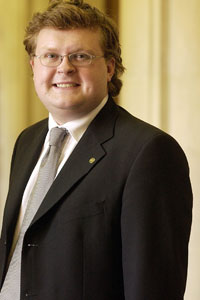 Interestingly it would seem this Tory turncoat lives with his girlfriend Laura in Hertfordshire when his work as a professional gambler specialising in betting on EU currencies it would apear. He is in fact 29 and was first elected when 21 as a Councillor, elected as a Tory in Tyneside!

One well remembers the screeching and ranting of UKIP when turncoats like Craig MacKinley, Petrina Holdsworth, John West and Robin Page having seen through the sham and corruption that is UKIP and David Bannerman (whilst under investigation by OLAF having used UKIP to get elected returned to the Tories) and the like defected to other parties and one notes UKIP leadership's dishonesty and abuse of those who dare to point out their own dishonesty, hypocrisy and corruption - Yet it seems those who try to prolong their political positions by abandoning their own electorate are welcome with open arms.

Some might see this as rank hypocrisy! Hypocrisy or not there is little doubt it is 'rank', but the election results of UKIP in domestic politics show that the public are well aware of how odious its leadership and parasites are having out of the 19,500 available elected offices elected UKIP to hold less than 30!

Tragic really when the patriotic public are so clearly calling out for an honourable, ethical standard in politics to lead these United Kingdoms out of The EU and even the Tory voters want a referendum where 66% would vote to leave against a National 30% who would vote to stay in the EU.

A measure of the untrustworthy duplicity of the Tories was shown by the vote AGAINST their electorate in the House of Commons debate on a referendum which Nikki Sinclaire and her team obtained!