.
A Measure of UKIP UKIP London's Lack of Ethics it seems!

The extreme racist/religionist obsessions of Gerard Batten do NOT represent these United Kingdoms - merely those of the gutter like himself!

Now it seems he enriches his family at our expense whilst consorting with extremists, the violent and supporters of Anders Beivik of The EFD!
.

although this is not easy to read this invoice from Harold Batten for work commissioned by Lawrence Webb as London Regional Organiser for UKIP paid we understand by The EU as a member of UKIP staff working for Gerard Batten - Printing seemingly denied in that I gather Gerard Batten seeks to lead people to believe that nepotism is NOT a feature of his position feeding from the troughs on the gravy train.

Notably this order is authorised by the duplicitous and dishonest Mick McGough.

It is sad that the members of UKIP grass roots and the electorate are seemingly so consistently befouled by these low lifes enriching themselves at our expense!

I was interested to note thaty when asked to sign the petition for a referendum assembled by Nikki Sinclaire, which obtained a debate in The House of Commons which so spectacularly advanced the Leave-The-EU cause Gerard Batten declined in the most disparaging terms - probably because it was not extreme enough, racist enough or anti Islamic enough for his self serving choice!

I note even Nigel Farage signed the petition AFTER THE EVENT! Whilst trying to gain some reflected glory in a campaign he actively tried to sabotage! 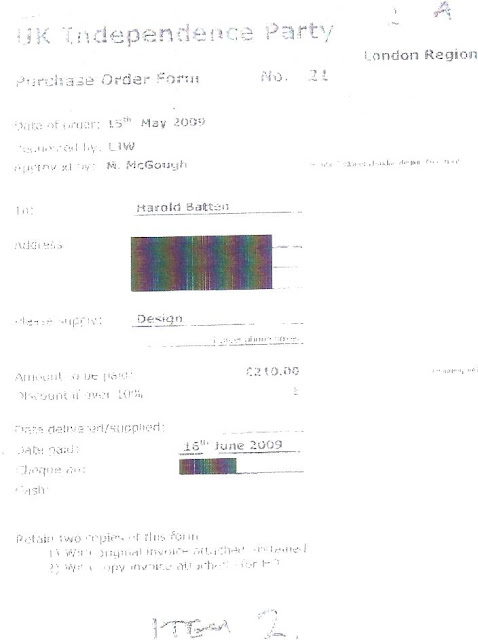