Clean EUkip up NOW make UKIP electable!
.
The corruption of EUkip’s leadership,
their anti UKIP claque in POWER & the NEC
is what gives the remaining 10% a bad name!
.
UKIP IS WELL SHOT OF David BANNERMAN -
LET US HOPE

The Tories Still Have The Lid Off of Their Waste Bin

More To Go From UKIP YET - To Make It Fit For Purpose!
.

do bear in mind it was I who spoke out loud, around when the picture of David Bannerman in this article - just over 7 Years ago when he not only betrayed The Tories but lied through his teath having failed in the big pond, to engratiate himself with the minnows in what was The UKIP Puddle some 7 years ago.

David The Desk - Pigeon Holed over 7 years ago
As A Liar, Cheat & Self Serving Low Life
TIME HAS PROVED ME RIGHT
David Bannerman lied about his track record in The Tories where he was virtually unknown and apart from being a bag carrier had never had much of a job.

Then he lied about his parentage.

He then lied about his ancestry.

He then lied about his achievements in a CV that contained almost as much Hockum and Self Serving Spin as the duplicitous and dishonest Marta Andreasen.

Whilst bringing all these clowns, wastrels and self serving parasites on board to the detriment of the party so that he could build a dung heap on which to stand in no fear of being outshone consider who he drove out in disgust: CLICK HERE So that his mediocrity would never be outshone nor his inability and ineptitude as a leader would not be challenged!

David Bannerman should fit in well with The Cleggerons - a cheat, a liar, a turncoat and a self serving rascal. 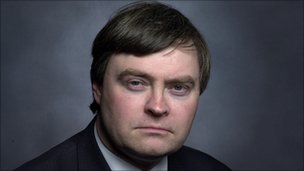 The Eastern MEP's defection from UKIP to the Conservatives has angered his former colleagues.
"Nobody really knew who he was, there would have been a bigger reaction if one of our local councillors had defected to the Conservatives," says Lisa Duffy, the UKIP Mayor of Ramsey in Cambridgeshire. She says she used to call Mr Campbell-Bannerman a close personal friend.
"I was with him at a party just the other week and he gave no indication he was going to do this. How can he say we're just a pressure group? What's he been doing for the last five years?"
UKIP's leader Nigel Farage is also just as blunt about his former deputy, telling us: "I think he's been a disappointment to our members in the East. This defection is purely about his career. We'll just shrug our shoulders, ignore him and move on."
If he didn't have enough to cope with, Mr Campbell-Bannerman's office in Cambridge has got a burst pipe and he's had to base himself in Health Secretary Andrew Lansley's boardroom.
"You've got to be brave to do this" he says "and you do get a lot of abuse and vitriol but I haven't changed by views. I am still 100% behind withdrawal from the EU" he said.
He hasn't wasted time espousing his views within the Conservative party either.
In an article for the influential Conservative Home he said the Tories should be changing their policy on Europe either by allowing an in/out referendum or ideally by advocating withdrawal.
"The situation is changing," he says. "The Euro is in trouble and may well collapse, more countries need bailing out, a growing number of people are questioning why we are still in the EU.
"I want to argue from within (for withdrawal). No one has painted a picture of a positive alternative of an independent Britain outside the EU trading in a friendly way."
So within a fortnight of joining the Tories he's already rocking the boat.
The Conservatives will tolerate Mr Campbell-Bannerman's views - many other MEPs and MPs share them - but they are in the minority and there are no plans yet to change party policy.