Even the sad inadequates who form the claque of sycophants are clearly bewildered as they trot out their juvenile hero worship - oblivious of just how stupid they show themselves to be!

The older ones see their scams and jollies threatened by their own corrupt inadequacy!
.

UKIP has been extraordinarily fortunate to date as they are considered of such little relevance that the media have, like the public, largely ignored their childish squabbling to keep their snouts in or near the troughs on the gravy train.

As Steve Allison so clearly put it there is no clear provenance that UKIP MEPs taking up their seats in the farcical EU Parliament has been of any benefit to EUroScepticism and withdrawal from The EU.
Accurate QUOTE CLICK HERE

I trust this picture will help - The theory that it was 'Set Up' was one of several put forward by Nigel Farage over a period of time as each previous one was shot down in flames: 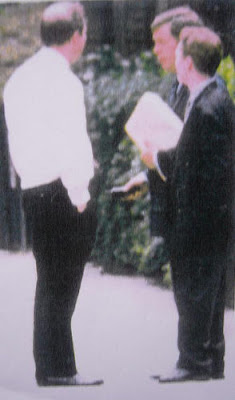 There were even claims made that the meeting had never taken place which somewhat unravelled when it was scientifically proven that the picture was NOT a photo montage.

Interestingly the many stories put forward by the Farage spin machine were so palpably dishonest that they destroyed any hope of rebuttal and an article in The Times Newspaper stood uncorrected as factually corrected.


"I don't question HIS recollection of the incident or HIS interpretation of the story. I'm sure he is sincere in his beliefs. Similarly I don't question anyone's belief in an almighty God. I'm sure they are sincere in their beliefs. I don't share those beliefs but it doesn't  make me right and them wrong or visa versa. However, I know that you and I will never agree on this because there is no god but Farage and Heaver is his prophet so there is no point discussing it further really is there?"

And to think this was said long after intelligent people had realised what a nasty little creep Michael Heavers is - currently he is clearly Nigel Farage's butt boy a funded cheer leader and praise singer without ethics, principles, vision or integrity, replacing the serial liar and utterly corrupt failed publican, press officer and much else - Mark Croucher.

Nigel Farage's personal links with The BNP were irrefutable and his links with The National Front are ongoing though as The NF fades there is less notable a link.

That Farage's father Guy had NF links as a Subaltern in the army before he left and that the close family friend Buster Motram, who was introduced by Farage to the party against wiser counsel. That Farage had racist and anti Jewish links is irrefutable - you will also note he spoke on numerous occasions at The Swinton Circle, seen by many a more balanced individual as racist and most clearly an organisation which harboured known fraud and corruption giving a frequent platform to the known criminal Tom Wise.

Do not be beguilled by the politically idiotic and malicious with stories of National Democrat membership being of overly much concern as it was a nascent organisation that was made up of those largely moving away from the hard core racism of The National Front or its splinter group The BNP. The ND had little time to formulate policy before it sallied forth into an election, largely making up policy as it went along.

The National Democrats didn't last long and withered bringing down The National Front as it slid from obscurity to oblivion, some members drifting off to The BNP and others to meet up with chums from NF days in UKIP whilst the raw recruits in the main seem to have been welcomed by UKIP.

Farage's election agent for a considerable time was National front.

The renunciation of The BNP of today is a desperate move to create a distance for publicity purposes from the racist, anti Jewish anti homosexual and violent agenda thinly disguised in The BNP whilst openly supported by UKIP within The EU - despite any protestations to the contrary.

Look closely at UKIP's Pan EU Political EFD Grouping and you will realise just how corrupt and dishonest is their position renouncing The BNP on the one hand whilst all too willing to support their EFD equivallent in their violent anti homosexuality, holocaust denial, anti Judaism and racist comments and behaviour.

That members of UKFirstParty are banned is a pure act of petty spite as a result of shame at having lied cheated and rigged internal selection procedure and having been called to account by some who had spoken out against such corruption.

That UKFirstParty was set up as a UKIP spoiler party was a myth promoted to cover the shame of losing such a large chunk of relatively influential senior members as a result of the outright dishonesty of UKIP leadership and the parasites who feed from their largesse. 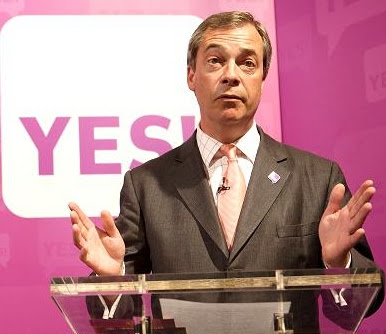 A former deputy leader of UKIP today announced his defection to the Conservatives in a bitter blow for the anti-EU party and its leader Nigel Farage.
David Campbell-Bannerman, the UKIP MEP for the East of England, said that he was switching to join the Tories because he wanted to represent a serious party and not a pressure group.
Mr Campbell-Bannerman, 50, had been responsible for drawing up much of UKIP’s wider policy agenda including defence and foreign policy and his defection comes at a time of simmering discontent with Mr Farage’s leadership.
Earlier this month, Marta Andreasen, UKIP MEP for South East England, called for Mr Farage to step down after disappointing results for the party in the local elections.

“Party members and supporters are justifiably angry. After promises of success and claims that the party would triple the number of its seats, after large amounts of party members and donors money was spent on what was a poorly led campaign, the result was frankly dismal,” she said.


Here’s thrilling news for Nick Clegg. At last there’s a party leader who is having a more torrid time: Nigel Farage of the UK Independence party. First, the MEP David Campbell Bannerman, a former deputy leader, defected to the Conservatives. Now another MEP seems to be threatening legal action.


When Marta Andreasen, once hailed as UKIP’s Sarah Palin, recently called on Farage to resign after the party’s dismal haul in local elections, he dismissed her as “hopelessly out of touch” and added “she hasn’t been in the UK for several months”.


Andreasen now wants him to retract that remark, warning darkly of “other avenues of redress”. She says: “His comments create the impression that I am somehow an absentee MEP. Nothing could be further from the truth.”
UKIP and Farage, who was only re-elected leader last November, are beginning to resemble a squabbling couple: can’t live with him, can’t live without him.

Also an interesting truth catches up with Nigel Farage from 2004 see: CLICK HERE
.