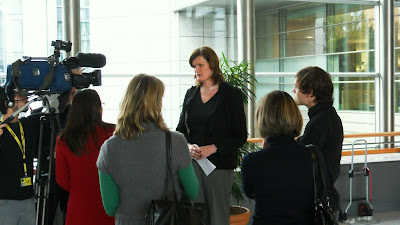 I'm a little short of detail at the moment but I understand that Nikki Sinclaire had a meeting with Jerzy Buzek  The President of The EU's pretend Parliament today. I gather from my contacts that the details were given at a Press Conference after lunch in The EU Brussels building.

We understand that an official complaint has been made under the sexual orientation laws of The EU against Godfrey Bloom MEP for UKIP for yet another of his crass foot in mouth incidents.

So Blooms latest ways of best representing UKIP in the manner which reflects them is copulating with a black prostitute on the bonnet of a car in a street! legging it to avoid payment in a bordello, giving at least one speech drunk in the EU's pretend parliament, making crass sexual remarks about women guests of UKIP, urinating in the corridors of hotels and getting banned, leaking eMails showing the ultimate betrayal of UKIP by himself and his duplicitous colleagues in forming a new racist and intollerant Pan EU Party of the gutter sweepings willing to associate with such low lifes and nere do wells as UKIP MEPs.

Now Godfrey Bloom is under investigation by the parliament and likely to face censure and bring UKIP into further disrepute for his open and tasteless anti homosexual remarks designed to denigrate and defame Nikki Sinclaire.

This latest crass behaviour of this unpleasant little man is likely to cause UKIP considerably greater problems than may be at first appreciated as it would provide proof positive of gender and sexual orientation prejudice in the very structure of UKIP together with other easily identifiable instances in future legal hearings hearings should Nikki Sinclaire decide to expose the corruption of Farage's UKIP.

I very much doubt UKIP has heard the last of their vile behaviour.

Is it any surprise that only the gutter sweepings of EU politics wish to have anything to do with Farage and his risible standards as leader of his fiefdom.


My complaint against Godfrey Bloom MEP

After I was elected to the European Parliament in 2009 I raised serious questions over the composition of the political group - EFD - that my party, UKIP chose to ﻿join.

Immediately, I identified extremist behaviour including homophobia from the Italian Co-Presidents of the group, Liga Nord. I since discovered convicted racists, anti-Semitic and further homophobia. I found it incredibly difficult to accept that my colleagues parties called for racial segregation on Italian public transport, that the gas chambers in Auschwitz were nothing more than disinfecting chambers and its former mayor of Treviso called for the "ethnic cleansing of faggots" from his city.

I tried hard to change the situation, but my protests were ignored. I felt obliged, in order to stay true to my beliefs and values, to resign from the EFD group.

As a result of this I had the UKIP whip removed, and I now sit as an independent MEP. A fellow MEP, Mike Nattrass also left the group for the same reasons as myself. He has not had the party whip removed. I will leave you do come to your own conclusions as to why that may be.

I have recently been subjected to harassment and intimidation from a number of sources. This has now spilled over into the Parliament itself, and I have today met with President Buzek, who has very kindly re-arranged his busy schedule to meet with me. He considers this a very serious matter and launched an investigation in respect of my formal complaint I have made against a fellow MEP, Godfrey Bloom.

I have been abused and intimidated by this gentleman, and my staff have had to publically endure verbal abuse attacking me.

There should be no place for harassment, for intimidation, or for homophobic abuse anywhere in our society.

These events have been deeply distressing. I am now publically calling on Mr Bloom to do the honourable thing and apologise.

Is it any wonder that even Mike Nattrass has woken up, if belatedly! Of course Nattrass not being the sharpest knife in the box has, as ever, taken far too long to make a decision thus rendering his own decision all but irrelevant when finally it occurred! It has ensured that Nattrass will be dumped by Farage and prevented from joining his new gang, something Farage had hoped not to do as he seems hopefull of having the 4000 income on each MEP and also travel issues to bribe other MEPs to join his gang.
In reality this will actually be beneficial for Mike Nattrass as long as he has the self confidence and can hire staff competent to guide him as an Independent MEP either fully Independent or Independent UKIP as with Nikki Sinclaire - under which circumastances with guidance Nattrass will prove far more effective than any of Farage's diminishing claque of utterly useless MEPs.
Independence in the EU Parliament working with a common aim to Leave-the-EU is realistically the only way to act with integrity for any British Politician either in the EU's so called Parliament or ethical politicians in Westminster or local Government. Having struggled to reach the higher moral ground let us hope Nattrass does not get scared of standing on his own feet and seek someone to hold his hand such as Robin Tillbrook and his failed English Democrats, which would be the end of what little credibility Mike Nattrass is trying to claw back.
~~~~~~~~~~#########~~~~~~~~~~
INDEPENDENT Leave-the-EU Alliance