The corruption of EUkip’s leadership,
their anti UKIP claque in POWER & the NEC
is what gives the remaining 10% a bad name!
.
UKIP's LEADER'S BILE SPILLS OVER - YET AGAIN UKIP IS LED FROM THE GUTTER!
DAMAGED BY IT'S OWN LEADERSHIP & SUPPORTERS!
.


I thought, after the attempt by The Farage Fan Club, to smear Nikki Sinclaire MEP with the article from The Pink Press by the homosexual with a very similar name but totally unrelated Nikki Sinclaire - a spot of Google would be apposite to see just how irresponsible Farage has permitted UKIP to become.

THE VERY FIRST Google came up with the following articles but of more note was the advertising banner placed by UKIP in The Pink Press!

I wonder what part/favours that sordid pervert Gawain Towler had to play in this - I hasten to add the soubriquette of 'sordid' is to the odious Towler's boasts in public on his blog of sexual gratification witth any gender and no thought of loyalty and if his wife is to be believed even with his daughter - as was discussed in detail by UKIP SW Committee which despite Elizabeth Burton's idiotic comments de-selected him.


Aware of all the circumstances and in flagrant disregard for the members let alone the reputation the immediate following Monday Nigel Farage reinstated the odious man who is also a proven liar, but like so many in UKIP they are rewarded for their lies by Farage - which is why, most probably, so few people trust UKIP when it comes to elections of any consequence and why out of around 19,000 positions in Governance available by election in Britain UKIP have achieved less  than 30 under Farage's leadership and after almost 20 years of effort by the decent grass roots members of UKIP the decent folk have largely drifted away.


UKIP is now led by some of the most revolting people in British politics not just the self serving oik Farage with his total lack of any morality, loyalty or probity unless it pays HIM - through the utterly incompetent and dishonest Lord Pearson, the creepy nebish and serial liar David Bannerman, the trash figure of the womanising drunkard Bloom, wee Willy Dartmouth and his childish temper tantrums of a spoilt brat, liars like Hugh Williams, Malcolm Wood and their ilk and the dishonest gutter snipe and butt boy of Farage's Mark Croucher - Be minded there are no depravities of dishonesty that this ghastly little slime will not sink to as a wholly owned Farage Gofer.


The articles below give an interesting insight, by accident, of the damage done to UKIP by their anti homosexual stance both as it is apparent in the situation of Nikki Sinclaire and of course in the Party allegiance with the declared anti Homosexual stance of Farage's Pan EU Political Party group The EFD - likely to replace UKIP after 15-Nov-2010 if Farage is able to lie his way into the leadership!

A lesbian UKIP MEP who left the party's European grouping has been told she cannot stand for election under her party. Nikki Sinclaire, an MEP for the West Midlands, was told she had broken party rules.

A lesbian MEP for the UK Independence Party has left the group her party joined in the European Parliament. Nikki Sinclaire announced this week that she was leaving the Europe of Freedom and Democracy group.

An Israeli rabbi swears by a novel way of getting lesbians to return to their husbands, special sand that will have the estranged wife running back.
The unnamed rabbi swore that his "special sand" would bring the wife of a local man in Bnei Brak, Isreal, back to him, with the sand lifting the curse that his wife was under.

PinkNews.co.uk Exclusive Feature
PinkNews.co.uk's Nikki Sinclair and Sarah Pinn report on a Jewish gay group using the festival of Passover to celebrate freedom from both oppression and homophobia.
"I bet when you were a child sitting at the Seder table with your family you never thought one day you would end up here!"
This was Rabbi Mark Solomon's opening gambit at the communal Seder night for the Jewish Gay Lesbian Group (JGLG.)

Comment: The small gay pride march with a lion's roar

PinkNews.co.uk's Nikki Sinclair reports on South Africa's 5th gay pride celebrations in Cape Town.
Imagine how delighted my girlfriend and I were last Thursday to find out that, through sheer serendipity, we had managed to arrive in Cape Town just in time for 'Pride' weekend, during our brief trip to South Africa. We had spent a very interesting ten days already, visiting the rather more conservative Durban and Pretoria, and were now staying very close to the gay village in Cape Town. We couldn't wait to take part in the festivities, and hopefully make some new friends along the way.

This film explores the difficult subject of orthodox Jewish women living in Israel who try to reconcile their deep religious belief with (the forbidden) homosexual practice. The genre was more fly on the wall documentary than feature film and focused mainly on the real life stories of two lesbian women living in the ultra orthodox religious communities in Jerusalem.
The first, a single woman, seeking understanding tolerance and acceptance from her family and permission from her rabbi to live as a lesbian women and practice her religion

No Comments | Read full story »
It would seem the source of this shoddy attempt by UKIP Leadership to smear Nikki Sinclaire was originated from a very poorly researched article in the conspiracy Comic published by Brian Gerrish but since David Noakes left as a reliable organ of anything but idiotic the fantasies and ill researched paranoia of wee Brian Gerrish The UK Column has been no more than ego publishing - worse even than vanity publishing.

In an exchange sponsored by The UK Column running to some 40 comments the standard of veracity is virtually nil being 'driven' by some coward who styles himself Baron von Lottsov, who is to be found spreading his vituperative bile on many a forum where he is clearly completely 'barking' and almost as obsessively ill informed as The UK Column itself - never checking facts and endlessly supporting attacks on people all too often by cowards in anonymity!

As this screen capture shows: 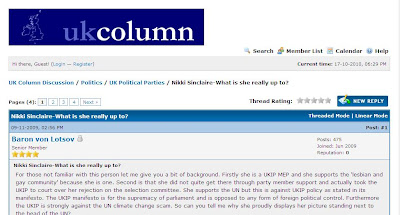