To Leave-The-EU
Clean EUkip up NOW make UKIP electable!
.
The corruption of EUkip’s leadership,
their anti UKIP claque in POWER & the NEC
is what gives the remaining 10% a bad name!
.
UKIP Led by Farage is Just A "Grubby Little Organisation"!
So says pop idle Duncan Bruce!
Well I guess with posters like the liars and cheats Mick McGough, Douglas Denny, John Ison, Mark Croucher, Ray Finch, Paul Nuttall and the like Duncan Bruce isn't far wrong!!
. 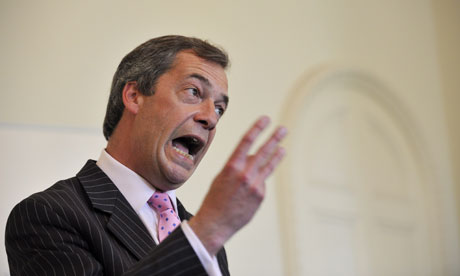 Band member Dunstan Bruce said his reaction to the news was one of:


"total and absolute outrage and horror".

He suggested that the party must have been unaware of the band's background.


"This song being used by Ukip is so wrong. I am absolutely appalled that this grubby little organisation are stealing our song to use for their own ends. It's beyond the pale and if they use it again we will consider legal action."

To view the rest of the article CLICK HERE
For more details of the conference see last year - much the same with the same 400 presented as near double that rattling around in an oversized facility with a platform to promote the EU's aims with irrelevant foreign politicians and the normal little claque of Farage sychophants clamouring for attention to get a hand up onto the Gravy Train.

Sad really when you realise whist the whole of UKIP has been so badly led they have done nothing whilst those who really seek to Leave-The-EU have gone out and helped Nikki Sinclaire as an independent to get over 100,000 signatures and driven her campaign vehicles and ad vans 1,000s of miles working on a daily basis towards the Leave-The-EU cause - whilst the Judas Goats and Plastic EUroSceptics were merely helping The EU and routing around in the trough for more money for themselves!

It seems that UKIP has so lost the plot that their only means of defending themselves is not to show their achievements but to abuse and lie about anyone who tells the truth about them or does not endlessly worship their ineptitude.
. .
~~~~~~~~~~#########~~~~~~~~~~
INDEPENDENT Leave-the-EU Alliance