To Leave-The-EU
Clean EUkip up NOW make UKIP electable!
.
The corruption of EUkip’s leadership,
their anti UKIP claque in POWER & the NEC
is what gives the remaining 10% a bad name!
.
Independent Nikki SINCLAIRE MEP Steals A March on The Judas Goats & The Plastic EUrosceptics of EUkip & The Tory Party!!

this discussion from one of the many Forums where I post material opposed to membership of The EU may interest you:

However, even if people haven't got computers we can't hold progress up.

Computers are part of our lives and they won't go away.

We must adapt to modern society or we will be left behind.

All kids at school are computer literate, with the rest of the population following fast.

Over 50s are one of the fastest groups that are jumping on the computer bandwagon.

woopy - subsequent to my last posting I have been sent a copy of a letter I have been awaiting for some days - AGAIN we have The Independent MEP Nikki Sinclaire to thank for this: 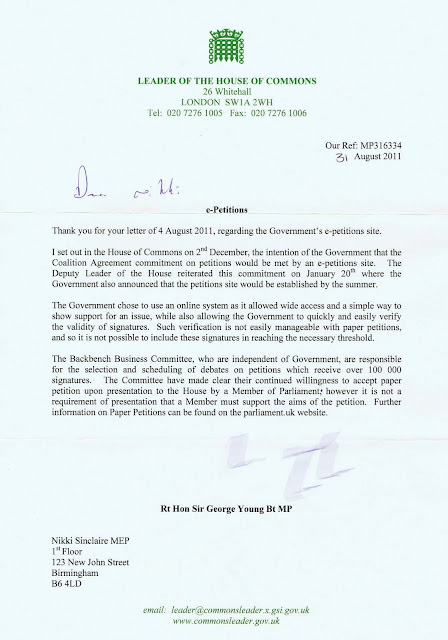 This means that her petition of over 100,000 signatures as announced and surprisingly widely published, in view of the fact her schedule was committed to announcement from Smith Square slap bang the day after the civil unrest when all the looters in suits were mumbling and squeeeeeling at the thought of competition from the proles.


This letter solves all problems as it can thus be an 'e'petition on the .gov site AND a paper addition.

With Parliament resitting watch out for the presentation of the petition shortly and on a totally cross party basis.

I believe we all owe Nikki Sinclaire for her efforts - have you signed her petition? It can be signed on line OR on paper as the letter above shows - in fact her office is transposing all ePetition data onto paper and I gather an outside agency is erradicating duplicates and collating the data under strict data protection terms.

This letter now to hand I hear that Thursday will be likely to be the next ratchet turn ;)

Obviously the YouGov Poll was hugely significant and now the aim is to go on to yet more signatures to ensure no one tries to duck out on the Government benches when a Referendum becomes inevitable now, especially as well over 70% of Tory voters want a referendum on In/Out with regard to the EU, and embarrassingly the Judas Goats approved by the Tories as Plastic EUrosceptics with their other 'PLEDGE' Polls have rather lost control with, I gather, less than 50,000 signatures and I am given to understand some 30,000 of those are merely recycled and laundered Democracy Movement signatures though this is I concede hear say from the previous referendum that was given them!

Interestingly I gather on various technicalities The Express signatures are invalid as the poll was not carried out properly, or so I hear. However I doubt Mr. Despond will be giving praise to Nikki as we all know she is not a pornographers lap dog and seeks only relevant and serious publicity - hence her achievements.

She can in all fairness now say she has actually achieved, laterly with Mike Nattrass & Trevor Colman once they left Farage's control and thus The EFD, they have achieved more in real terms than UKIP has done in all its 18 years of self enrichment and posturing for its leadership!

At least every single signature on Sinclaire's Petition is genuine and her ad vans etc. have paid off - even if she is hoping for donations to help her fund them!!!