It is with regret that I heard on Tuesday of the death of David Lamb on Monday last. 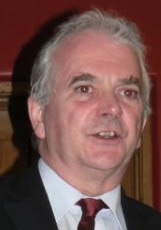 I had never met David but had spoken with him on several occasions both with regard to our mutual enemy Cancer and on the unsurprising subject of Politics.

David had been a founder member of the Lechlade would be pressure group in UKIP working towards more structure and accountability in UKIP.

David's field of expertise was Pensions and finance and he very professionally produced a number of very interesting financial documents for the nascent group, which was fairly rapidly out manoeuvered by Nigel Farage and his claque who, as ever, feared any form of intelligent thought that was beyond their direct control - lacking competent and clear leadership the so called 'Lechlade Group' buckled leaving the field to Farage's self serving sycophants.

Sadly David was already manifesting the ravages of cancer and facing various operations on his brain tumours with great courage and a wry sense of humour. David's personal battle with cancer was well fought and very brave but it undermined his wish to act for his Country as a true Patriot, more than somewhat to his annoyance. As I understood it in conversation as I was also experiencing one of several cancer ops. of varied severity.

A measure of David's stoic 'grave' humour was his chosen 'e'Mail address at BrainSurgery@......

I was sorry David lost his battle with this pernicious disease and can only hope his end, though a release, came without suffering and with dignity.

My heart felt condollences firstly to his family but also to his many friends with whom he clearly made a mark and an unusually strong bond.

We are all diminished by his passing after his contributions to our EUroSceptic cause - In his memory and that of others who have gone before we must redouble our efforts to reinstate our Sovereignty and liberate OUR Nation from the thrall of EU Membership.

Thank you David Lamb for the efforts you made for us.


Sadly David LAMB died on 04-Apr-2011 - obviously everyones thoughts are with his family where he will be sorely missed after a brave fight against brain cancer over several years.
We are ALL diminished by the death of David Lamb and for more details you may care to see:
ukip-vs-eukip.blogspot.com FS 2011 FS 04 FS 0401-david-lamb-in-memoriam-died-monday dot html
where FS is a forward slash
OR Google:
ukip-vs-eukip and seek posting #0401
David will be missed and his courage long remembered.

at Reading Crematorium at 11:30am

I tried to post The In Memoriam details to UKIP Web Master on You Tube video but sadly UKIP are unwilling to accept comment being unable to handle discussion or criticism and thus they could not be bothered to list the sad death of David Lamb who did so much for UKIP!
.