the visit to London & day and 1/2 of campaigning was a really good investment for EUroRealism particularly as it is already paying off - The Sunday Times article is the product of an interview  with Marie Woolf and the interviews with The Express, News of the World, BBC etc. may well also pay dividends towards leaving the EU in the long run!

Also the visit to Tunisia had some well planned spin offs that will make huge differences for EUroRealism in the mid and long run - it was so much more valuable than the jollies featured in The Daily Mail this week!
To see the scams & jollies MEPs get upto CLICK HERE or HERE 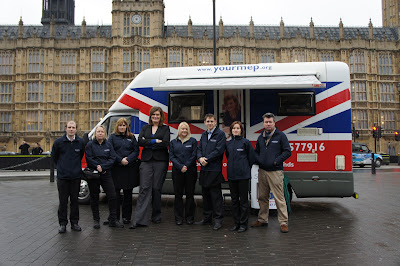 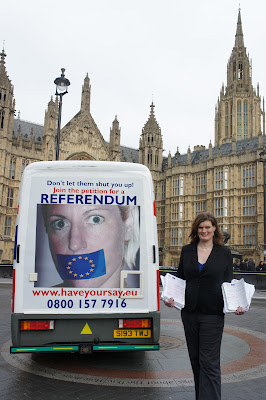 With cuts beginning to bite, the government's move to install a new MEP is labelled undemocratic and a waste of taxpayers' money

The government is to install an extra Tory MEP at a cost of more than £1m a year, in a move that has been condemned as undemocratic and a waste of taxpayers’ money.
Foreign Office ministers are pushing through a law that will create a new seat for an MEP in the West Midlands constituency. The move follows a reconfiguring of seats in the European parliament that has given Britain the right to an additional MEP.
The government has decided the seat will go to a Conservative, based on the results of the last European election in the region, without holding a fresh election.
Opposition MEPs say the seat should only be created at the next European election in 2014. They argue this would be more democratic and would save money. An MEP costs about £1.2m a year in salary, office and staff costs, travel expenses, pensions and other allowances. The money will come out of the European parliament budget, which is partly funded by British taxpayers.
Nikki Sinclaire, an independent MEP for the West Midlands, called for the plan to appoint the MEP before 2014 to be scrapped. She said the money should be used to save services facing cuts.
“It is unbelievable when essential public services such as libraries and school maintenance are being cut to the bone that the government is legislating to appoint another politician,” she said.
Critics say that if a by-election had been held, the Tories would have risked losing in a region that also has significant Labour and UK Independence party support.
The new Tory MEP will take up his or her seat when all EU states have ratified the protocol. Britain is ratifying the change via the European Union Bill, now passing through parliament. The MEP is expected to take up the seat by early next year.
Yesterday, the Foreign Office said: “Like all member states, we agreed in June to ratify this protocol as soon as possible, to enable the additional MEPs to be returned to the European parliament.
“It is in no way a question of the government ‘appointing’ an additional MEP.
“The European Council outlined a number of ways that the 12 EU member states concerned could elect their additional MEPs. Like most other states who gain an additional MEP, the UK will do this by referring to the results of the last European parliamentary elections in 2009.”
The Electoral Commission said it had calculated where an extra MEP could be located, but the government had decided how the seat would be filled.
It said: “We recommended that the extra seat be allocated to the West Midlands region. That is where our remit ends.”
The commission chose the West Midlands because it has the highest number of voters per MEP of anywhere in Britain.

Here is the Tory list of PPC MEPs:
Philip Charles Bradbourn,
Malcolm Harbour
Anthea McIntyre,
Michael Burnett,
Mark Spelman,
Daniel Dalton
As the first two were elected as MEPs I guess the next in line will be Anthea MaIntyre as clearly the list as I tracked it was NOT in alphabetical order!

~~~~~~~#######~~~~~~~
There is also an 850 word story across two pages in The News of The World - which I have read but am unwilling to publish yet as I have NOT seen it on line as unlike The Times I do not have a pass for the pay wall ;-) I'm not much interested in voyeurism, I know few of the so called Seeelebritys, sport bores me rigid and the back biting and gossip is of no interest.

Eventually I get the interesting bits sent to me by friends on the paper eventually!

The advance copy and details seems very healthy publicity for Nikki Sinclaire, but I shall wait till I get the final .pdf and confirm no alterations have been made to the final Journalist copy.