Clean EUkip up NOW  &  make UKIP electable!
The corruption of some of EUkip’s leadership,
their anti UKIP claque in POWER &  the NEC
is what gives the remaining 10% a bad name!

Heaven fore-fend could it be wee Gelly Batty, Rabid Bannerman & & the hairless Nutless trying to apportion credits to take the leadership?

They do say a new Broom Sweeps Clean:

By Nightmare V we come alive 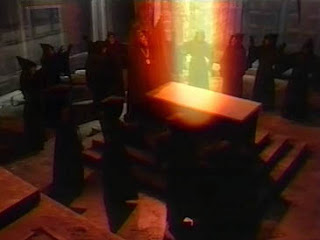 The Sefton and West Lancashire News
Your local newspaper proudly serving Sefton & West Lancashire
Pagans hit out at UKIP attack over holidays
19 May 2010
The region's Pagan community has reacted with uproar this week after a political party branded moves to let police officers celebrate their festivals as “madness”.
Pat Regan, founder of the Pagan Anti-Defamation Network, told The Champion on Monday, May 17, 2010, that a statement sent out by the UK Independence Party describing a ruling allowing Pagan police officers in Lancashire and Merseyside to take time off to commemorate their festivals as “politically correct madness” was offensive, and called for UKIP MEP Paul Nuttall to resign.
“I was saddened, shocked and appalled at recent comments made against the UKs Pagan minority by Paul Nuttall, MEP for the UK Independence Party. This type of negative diatribe against an innocent spiritual minority may in fact breach UK laws relating to Incitement to Religious Hatred. He may also be in breach of the UN Declaration of Human Rights and in particular articles 18 and 19. If Mr Nuttall values his own freedom of expression then he should be prepared to extend this essential liberty to others,” he said.
“Nuttall's disgraceful language belongs to a radical 1930s Germany and not a free and democratic UK 21st century society. I fully intend to expose and complain about Mr Nuttalls blatant ignorance and apparent bigotry, which may affect many ordinary Pagan families in society. After Pagans who will Mr Nuttall single out on next?”
The comments come after the Pagan Police Association has just been officially recognised as a 'diversity staff support organisation' by the Home Office, allowing Pagan police officers to take time off.
Mr Nuttall, who stood as UKIP's parliamentary candidate in Bootle at the general election, said in a statement issued to The Champion last weekend that Pagans had “unabashed sexuality and promiscuity”.
“These pagan festivals include believers behaving with 'unabashed sexuality and promiscuity', casting spells and dancing around naked,” he said.
“It is politically correct madness of high order for the Home Office to give this approval. Everyone is entitled to their own religious belief and if they want to use their holiday entitlement to be off for their festivals that's fine but it should not be a legal right.”
Lancashire Constabulary said it recognised the Home Office decision, saying:
“Lancashire Constabulary recognises that in order to effectively deliver policing services, the make-up of our staff needs to be fully representative of the communities we police and that religious needs and beliefs should where possible be accommodated in order to satisfy individual requirements.”
By David Simister
To view the original of this article CLICK HERE