.
Is Mick McGOUGH fit to represent UKIP / Anyone?!

Astonishingly this unfortunate obsessive and proven liar is employed by Batten & placed on UKIP's NEC!
. 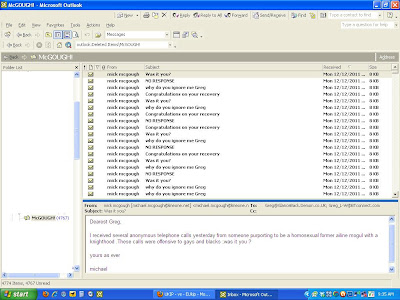 The unfortunate old man would seem to have some sort of obsessive disorder or perhaps the tragic onset of dementia.

You will note in his dottage he has moved on from cheating and telling lies to try to get on the EU Gravy Train this poor old chap would cross the country for the opening of an envelope just to bore people with his self congratulatory dishonesty.

You will note from the screen capture above my spam filter has picked up almost 5,000 offensive and repetitive spam 'e'Mails from him and also the Demon Address has done likewise.

This sort of behaviour from an elderly and dishonest member of UKIP's executive just makes the party look foolish!

Whether this is some sort of jealousy as in the past he has been desperately worried that I might be being paid for publishing facts about The EU and its colaborators who do so much to help them by bringing EUroScepticism into disrepute as he does.

Clearly from his public attempts to smear McGough has no understanding of principles, ethics or morality and is convinced that people only do things for money!

More worrying is the possibility that his obsession is of a more dangerous nature and based on some sort of homosexual fantasy as he has done much in the past, on public forums, to denigrate the fact that to save on potential death duties and to make life much easier for my partner of 26 years we married earlier this year and McGough seems to feel a need to denigrate her for making that choice. Rather a sensible one really in view of the expected terminal nature of my latest cancer diagnosis at the time! See CLICK HERE

You will note that of the some 10,000 spam 'e'Mails he has sent me in the last 3 weeks none have I bothered reading but clearly Mick McGough brings UKIP into disrepute with such obsessive and offensive peurile behaviour. Obviously with my virus detection he is one virus I am able to ignore!
. .
~~~~~~~~~~#########~~~~~~~~~~
INDEPENDENT Leave-the-EU Alliance