UKIP: Futurus, more from Nikki and Hate the EU, Love the Gravy Train 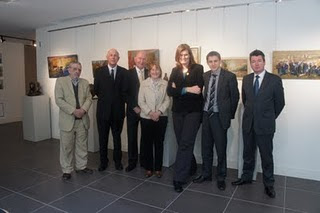 It was good to see Nikki Sinclaire MEP has come together with others to revivify Futurus as it has been a consistent and reliable think tank over many years.

I have always sought out the pamphlets and essays of Futurus as written by Tony Scholfield as a good source for factual information and political theories.

Best of luck to Nikki Sinclaire, Trevor Colman, Gary Cartwright and the Futurus team. A real way forward for the EUrorealist movement!

It was nice to meet up with some old friends as well as some current colleagues at a recent meeting in London to discuss the relaunch of FUTURUS, the think tank.

One of the many criticisms that has come out of the recent civil war in UKIP is the lack of academic integrity and a reliance on outdated arguments. FUTURUS will not be a UKIP project as such, that would not help our case at all, it will be non-party political, but with strong eurosceptic leanings.

There are certain policy areas in which eurosceptics are provided with rows of open goals. Sadly these are all too often missed, amongst the shadow chasing and in-fighting that dominates our slice of political space. FUTURUS is not the only such project emerging at present, and I think we can look forward to a long-awaited refreshment and rejuvination of our platform.


To see the original: LINK.

Can we now hope that with a serious Think Tank being put in place that Nikki Sinclaire MEP, Trevor Colman MEP, Tony Scholfield and their team can move forward with some gravitas - always absent within UKIP who in 18 years have not produced a single pamphlet of any gravitas - little wonder that the UKIP village idiot was despatched to try to gate crash the meeting but realising that Mick McGough stood no chance of admission - his dishonesty and gutter behaviour clearly precludes him from a meeting of moral or ethical people.

In desperation and with no one of any standing finally the last resort (Many have found him so) the dishonest and corrupt manager of UKIP's press office for lack of anyone competent was sent to hover around and loiter, a role well suited to Gawain Towler, in order to spy on who turned up!

Perhaps now that UKIP has been exposed for what it is the public will realise, what UKIP leadership never did, that reasoned argument outstripped chicken costumes, blow up toys and exhibits from museums or even rude and childish behaviour any day!

Perhaps we can look forward to a series of essays and pamphlets being available from Futurus and a sound web site from which to garner factual and well researched information as many of us do with EUreferendum blog by Dr. Richard North and others of their ilk - Sadly UKIP as an entire hugely funded party has been far outstripped by a mere handfull of individuals on their own without funding.

It will be noted that for information on UKIP for instance those seeking to keep pace with the idiocy of UKIP and their squabbling - which seems about all they do - tend to visit this blog and Junius as a first port of call particularly the activists, patriots and media!

I look forward to linking with Futurus once they are ready to help us all move forward.
.