To Leave-The-EU
Clean EUkip up NOW make UKIP electable!
.
The corruption of EUkip’s leadership,
their anti UKIP claque in POWER & the NEC
is what gives the remaining 10% a bad name!
.
~Prostituting UKIP for a Printer!!

As many UKIP Supporters like myself will have noted - A main example of why UKIP should sell out to The EU & Help Them form Pan EU Political Parties has been the fact that Godfrey Bloom joined one and bought a printer!

Personally my principles are not for sale and never have been!

For more details of Yes or No to PEPPs see: CLICK HERE

it was quite funny to see one of the UKIP Parasites funded by The Party exposing the odious bean counter and serial liar Mick McGOUGH's best selling line as a 'red Herring' - Now we all know McGough's ethics stink and his understanding of duty and probity are more than a little 'Fishy' but to have a Farage appointee point out the man is a fool amuses me.


What little Jonathan Arnott forgets to remind people is that the lies Mick McGough deliberately told on his squalid little video showed how willing he was to lie and be emotive when bereft of facts to support him. 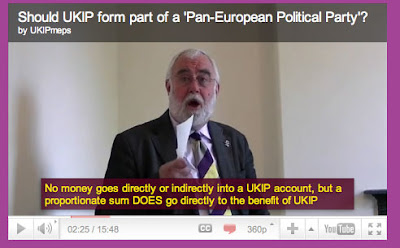 This is in keeping with McGough as he has a track record of lies and setting out to deceive his coleagues and UKIP members which has been proven.


He has the gutter manners, temperament and ethics of the very worst of Essex stereotypes! Judging by his actions in other areas I believe we can safely believe that he would lie and conive to sell his grandmother if he could gain from it.


Please Be Sure To
.