To Leave-The-EU
Clean EUkip up NOW make UKIP electable!
.
The corruption of EUkip’s leadership,
their anti UKIP claque in POWER & the NEC
is what gives the remaining 10% a bad name!
.
Parliamentary Patriots by Party who value Democracy!

These are the MPs who voted in favour of an EU Referendum in response to the overwhellming evidence that the peoples of these United Kingdoms want and will increasingly DEMAND a referendum on The EU!!
.

Further to The Hansard listing CLICK HERE of Patriots & Traitors: 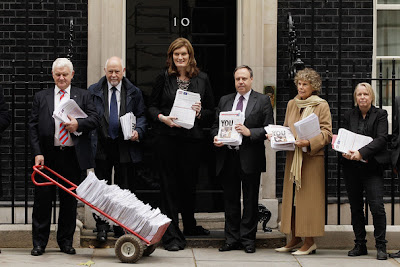 Here is a list, by Party Membership, of MPs who voted for a referendum on Britain's membership of the EU, in the House of Commons debate on the matter of a referendum on The EU of the 24-Oct-2011.

We applaud all those who acquitted their duty to represent the interests of the electorate who by a margin of over 70% want to excercise their fundamental human right of self determination.

It was good to see those Tories, Labour and LibDim MPs who had the courage to defy their clearly failed leaders Cameron, Clegg and Milliband after their disgraceful attempt to gag democracy by imposing three line whips on them.

The contempt for the peoples of these United Kingdoms as represented by Cameron, Clegg and Milliband is clear for all to see yet they have the obscene hubris & arrogance to talk about restoring democracy to Libya, by aiding in the slaughter, rapes & torture of many of the peoples of Libya in a clearly fabricated uprising against probably THE most stable regime in all of Africa led by a tribal war lord who welded together the most literate, best educated, home owning, car owning wealthiest peoples of Africa. A leader who within the context of Africa stands out as a beacon of success with his provision of Africa's best health service and best welfare system. A man who has brought the flowering of the desert to be a close reality with the provision of huge amounts of fresh water as an immediate probability.

So how about repatriating democracy to Britain by allowing the people a real say in how and by whom OUR COUNTRY is governed?

It seems at present the majority of politicians at Westminster vote in their own personal interest in complete disregard for these United Kingdoms, jobs, infrastructure, democracy, trade and sovereign independence for which our ancestors and many still alive have given or risked their lives. 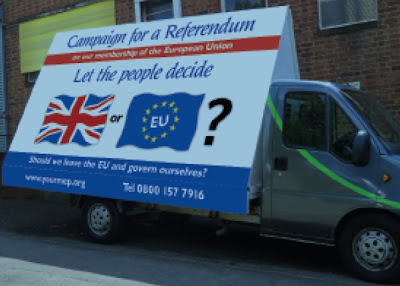 We all owe a debt of gratitude to Nikki Sinclaire, the Independent MEP who put together the team that obtained the 100,000 signatures required to ensure this debate & on the very day of the debate she delivered another 25,000 signatures to Drowning Street - The fight will continue! 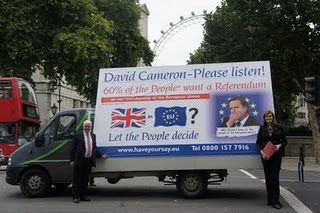 Conservative MPs (81 - Twice the size of the rather limp Maastricht Revolt where almost all in the end voted to protect their jobs!):

Two Tory MPs voted in both the Aye and Noe lobbies which counts as an abstention :