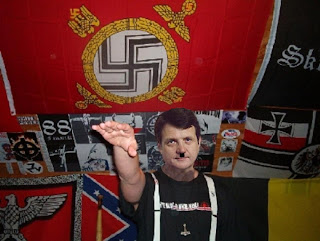 Gerard Batten's woes seem to be playing into the hands of Lawrence Webb's ambitions to oust him and be first on the list for selection as a UKIP MEP and jump on the Gravy Train.

You will note Lawrence Webb is doing all he can to raise his personal profile via the London Mayoral Campaign where UKIP can be expected to have a risible result!

Gerard Batten is it seems not only before the Courts for his racist behaviour and abuse and his extremist behaviour in anti Islamic promotion.

Then of course there is the matter of the OLAF enquiry #OF/2011/10/17 OLAF Investigation - Now I am given to understand there is an investigation by The Electoral Commission.

It does rather look as if this tedious little twerp is finally going to get his comuppance for his corrupt and odious behaviour basesd on his self serving and extreme prejudices and clear lack of understanding of justice and morality.

Then we have Lord Pearson's latest second reading of his Bill in The House of Lords - yet again!

Full marks for keeping the latest version alive but as with his previous efforts it does rather show a lack of ability in the EUroSceptic cause to keep presenting the same version again and again!

Do note his opening lines in his presentation as reported in Hansard - where he lists the previous times he has presented the same Bill without any degree of success. Though to be fair it has in the past jumped through three of the 9 hurdles required before falling!

A measure of the scum that has risen to the top of UKIP is that clearly they are convinced that everyone has their gutter standards of morality and only act for money!

Poor old Mick McGough is so obsessed with trying to defame and denigrate the truth that my spam filter shows he has sent me over 6,000 'e'Mails in just over a week! - It does rather show in written format just how low calliber are UKIP that a liar, bully and bufoon like Mick McGough is a member of Gerard Batten's claque and on UKIP's NEC!!
. .
~~~~~~~~~~#########~~~~~~~~~~
INDEPENDENT Leave-the-EU Alliance